#WahyooChallenge: From charity to publicity

Photo by Afif Kusuma on Unsplash

Inspired by social media trends, the Wahyoo team came up with a way to give back to society, and found their idea going viral

The holy month of Ramadan is a season of fasting and prayer for Muslims around the world, including in Indonesia. It is also a season of charity as many give alms, donate food or volunteer.

Peter Shearer and his team at O2O startup Wahyoo, which helps traditional eateries improve their business and income through digitization, found a way to give back to society – specifically, to Go-Jek’s food delivery drivers. They would order dinner using Go-Food in the Go-Jek app, then gift the food to the Go-Jek delivery drivers collecting the orders.

“I asked my team to do this because it aligned with our values,” Peter told CompassList in an interview. “If Wahyoo has 100 employees, and each of them can help one delivery driver, we would help 100 people in just one day.”

Wahyoo’s staff spread the idea among their family and friends through social media, encouraging others to treat their delivery drivers to a meal for breaking their fast at dusk. Soon the #WahyooChallenge hashtag was born, and the idea went viral in Indonesia. Users would post screenshots of their conversation with the delivery driver, showing the moment they told the driver to take the food for themselves.

Peter said that the idea of the challenge wasn’t new. In fact, he took inspiration from similar campaigns that he had come across. When he first decided to try it out for himself, he found out that the driver delivering his food hadn’t yet had his dinner even though it was already 8 pm, about two hours past iftar (breaking the fast).

“He only broke his fast with drinking water,” Peter recalled. As the Wahyoo Challenge spread, he would learn from social media screenshots posted by other users that many delivery drivers experienced similar hardship. 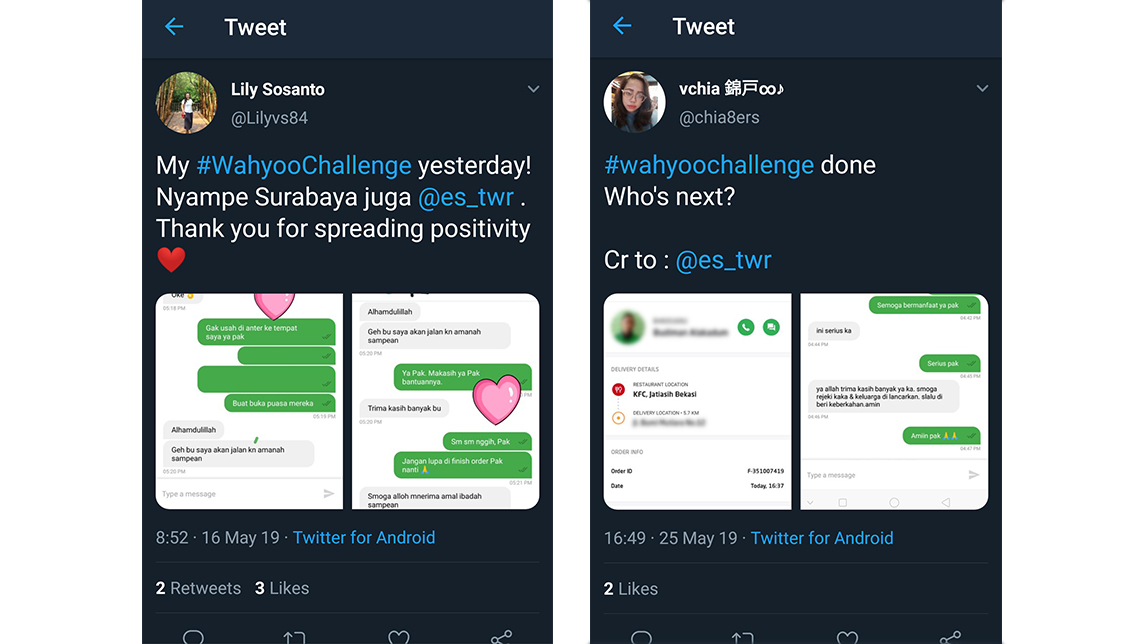 Restaurants have noticed the trend of customers treating the drivers to an iftar meal since at least a year ago. This time, establishments like Burger King, Djournal, Carl’s Jr. and its sister joint Wingstop are offering package deals that include a meal for the driver. Customers are encouraged to order around iftar time, so the drivers can get their free meal just in time.

While it was not intended to be a marketing campaign, the #WahyooChallenge has given the startup some welcomed publicity. Social media users and the media became curious about why the hashtag was named “Wahyoo,” and that’s when they started looking into the company, Peter said.

It’s a development that Wahyoo is happy about, especially since the company, which has been focused on the B2B side of working with traditional eateries, will be launching a B2C app in the final quarter of this year. “It will work like a loyalty program… Customers can also help us curate the stalls, giving ratings and feedback,” Peter said.

“For example, maybe the place they visited looked dirty, or the stall owner did not operate according to hygiene standards, despite our guidance. The customer feedback will help us spot these issues and take action,” he added. As part of Wahyoo’s program, they educate stall owners about hygienic food preparation practices and keeping their establishment tidy.

The B2C app is planned for release in “October, or latest November,” as the company is still finalizing some details. They are also bolstering the B2B side with new features, such as a point-of-sale system to help owners keep track of their finances.

Meanwhile, “it would be great if the customers can remember us as the company who helped Go-Jek delivery drivers,” Peter said.

Founder and CEO of Wahyoo

Insights on tech and the Indonesian diaspora in Silicon Valley

No bank account? In Indonesia, you can still shop online