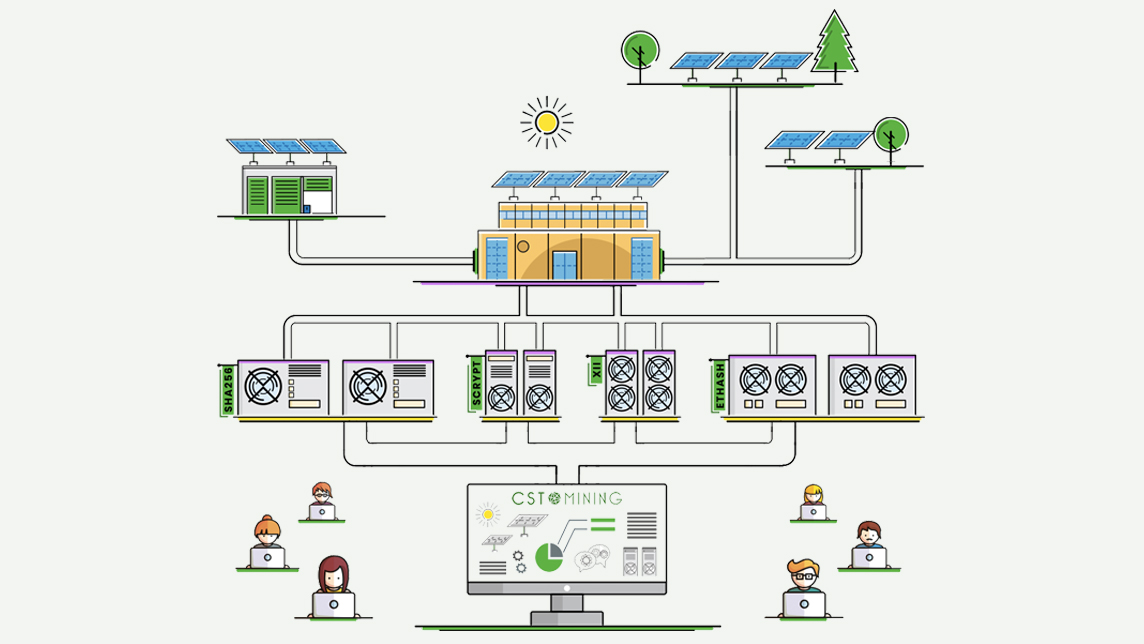 The Spanish startup also sources cheaper electricity for cryptomining. It recently raised €8.85m in a pre-ICO, enabling it to build the world’s first solar-powered cryptomining farm

As cryptocurrencies, particularly bitcoin, surge in popularity, so too has the amount of cryptomining and the energy it consumes.

The bitcoin hashrate, which measures how much power the bitcoin network is consuming, reached yet another all-time high last week. Cryptomining requires huge amounts of power to run the global network of computers that miners use. In a recent estimate, bitcoin-related energy consumption alone had reached that of the whole of Switzerland, the BBC reported.

There are over 1,900 cryptocurrencies in the world. Mining just one bitcoin node consumes 1.3 KWh, which is a significant amount energy. Strictly speaking, cryptomining and environmental issues go hand in hand, with cryptomining producing an estimated 32,078kt of CO2 emissions yearly.

A Spanish startup is building its own photovoltaic energy plants to run sustainable cryptomining operations with cheaper electricity. Mining cryptocurrency independently is complicated and unprofitable on a small scale because of the whopping cost of electricity, which in the EU has gone up 33% since 2008. As result, cryptomining has been traditionally carried out by larger companies aggregating a stack of mining equipment in dedicated infrastructures.

Alain Aguirre and Pablo Alonso, founders of the startup Cryptosolartech,envision a completely autonomous system where everyone can mine their own cryptocurrency. Both founders previously launched Puzzlegold, a consultancy that facilitates blockchain integrations across multiple industry sectors while seeking a sustainable and efficient way of extracting cryptocurrencies.

Alonso, the company's CEO, says that by reducing the high energy costs associated with cryptomining, the company hopes the industry will become accessible to more people: "We want to create a totally autonomous system so that anyone can create their own currencies."

Cryptosolartech's model issues a CST token, an ERC-20 type utility token used to run on the Ethereum network. In the industry, a utility token is issued to support the development of cryptocurrencies and can be traded for goods or services offered by the issuers. The CST token gives its buyer ownership of a proportional part of the cryptocurrency mining farm and photovoltaic energy plants, enabling them to mine with no added costs.  The more the CST is mined, the better returns the CST tokens will give.

"You can also choose to have our Cryptosolartech team mine for you, achieving a higher production of cryptocurrencies without having to do anything," Alonso said.

Cryptosolartech has built two photovoltaic solar plants, with three more under construction, in the southern Spanish region of Andalusia. It is one of the sunniest areas in the world, receiving more than 300 days of sunshine a year. Energy from the plants is used to power a cryptomining farm in Malaga, a city in Andalusia, where the company has installed 3,000 ASIC (application-specific integrated circuits).

The solar plants also guarantee a steady income for the company in the long run with an 8% rate of return, thanks to a 15-year power purchase agreement (PPA) to supply excess solar energy to Respira Energia, a Spanish green energy company that purchases and resells CO2 emission-free energy.

“We either have to make the algorithms used to mine cryptocurrency more efficient or find a way to mine them with renewable energy, like solar energy,” Alex Sicart said. A tech wiz and blockchain enthusiast, Sicart is one of the latest key member to join the Cryptosolartech team, which is mainly made up of cryptomining specialists.

To fund its early operations and developments, Cryptosolartech issued via a pre-ICO in April 2018 1.26bn CST tokens, each priced between €0.05 and €0.10.The pre-ICO raised €8.85m through the sale of almost 177m CST; 80% of the funds raised were used for development of the mining platform, construction of solar plants and critical acquisitions of land, servers and an industrial warehouse.

The profitability of a cryptocurrency also depends on the cost of the electricity used for its mining. The cost of solar photovoltaic technology has dropped 80% over the past 10 years. The PPA agreement the startup has with Respira Energia also makes CST a low-risk investment: should the value of CST decline in the future, income from its solar plants would still be guaranteed.

The company is also looking at ways to diversify the use of the solar plants.

"We also see a future in which this farm can continue to do R&D in renewable energy, and we are already in talks with [renewable energy service provider] the Platasol Group to include a biogas plant and other alternatives that are environmentally responsible," Alonso said.

Spain’s commitment to renewable energy has notably strengthened over the past year. Since last October, the ruling Socialist Party removed the “sun tax” that was in place for many years and blocking the switch to solar energy use. The country has now also drafted the Climate Change and Energy Transition Law, with the goal to cut CO2 emissions by over 90% by 2050.

A Greenpace study on Renewable Energy determined that the Andalusian territory has the capacity to generate power through photovoltaic sources 65 times more than what has been already projected in the 2050 demand. In July 2018, the Ministry of Finance, Industry and Energy offered to link 5,000 energy suppliers to the Red de Energía (REDEJA) managed by the Andalusian Energy Agency, giving them the chance to supply energy from renewable sources. Such recent developments offer a sound base and impetus for the growth of Cryptosolartech's business model.

Alonso is optimistic about the potential reach of environmentally friendly cryptomining solutions. "We want people to be able to participate in this movement that is here to stay,” he said.